The 2016 Asian Champions League group placings have finally been determined. Sydney FC find themselves in the group of death, facing Asian Champions Guangzhou Evergrande and Japan’s Urawa Reds plus a play-off winner most likely to be ACL regulars Pohang Steelers.
Sydney FC will host the famed Urawa Reds on 19th April, 2016. By that stage of the competition (the 5th match) it’s possible the two teams will be scrapping for the second qualifying spot behind Guangzhou Evergrande.
For the uneducated, Urawa are the J-League’s most supported team, regularly attracting more than 40,000 to club fixtures. Sadly for those loyal fans the Reds have often raised hopes only to fall short of silverware.
The year 2015 was another such year for Urawa fans, as the Saitama club lit up the J-League with a dominant 1st Stage win only to crumble in the finals series. The Reds then went on to play bridesmaid in the Emperor’s Cup Final on New Year’s Day, despite starting favourites against old foes Gamba Osaka.
For Sydney FC, the 2016 ACL will be just their third appearance in the tournament. Previously the Sky Blues finished 2nd in their group (2007) however, that was in a time when qualification for the knockout stage required winning your group. Ironically Sydney FC’s group included Urawa Reds back in 2007, and the two played out a nil-all draw in Saitama for the last game of the group phase. The draw denying Sydney FC the chance to advance, while Urawa went on to win the tournament.
In other Champions League news Melbourne Victory are set to host Gamba Osaka in the last game of the group stage on 3rd May. Before that however, Kevin Muscat’s men will face off against a play-off winner most likely to be Shanghai East Asia, managed by one Sven Goran Eriksson. Melbourne’s other group opponent is Suwon Samsung Bluewings of South Korea.
Australia’s Adelaide United will have their work cut out for them in the Asian Champions League as they’re forced to go through play-offs before enter the competition proper. The Reds – who have found a patch of form in the A-League – will need to beat Chinese club Shandong Luneng before joining a group including Sanfrecce Hiroshima, FC Seoul and dominant Thai champions Buriram United.
About Editor 252 Articles
Spreading the word on soccer in East Asia. 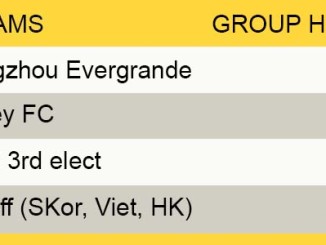