ACL favourites Guangzhou Evergrande travelled to Sydney for the second round of the Asian Champions League on Wednesday night. Along with their bursting budget the southern tigers brought along 10,000 fans from the local Chinese community, sadly for them the match didn’t turn out as predicted.

Sydney FC ran out 2-1 victors after a late goal from Milos Dimitrijevic sent the home fans into raptures. The Sky Blues deserved nothing less after seeing off a first half onslaught from the Chinese club, only to ambush them in the second stanza. Both teams engaged in a very physical encounter as the Iranian referee seemed to have forgotten his yellow cards.

For the home team David Carney’s contribution was brilliant. As well as providing the vital cross for Dimitrijevic’s 88th minute winner, Carney linked well with Shane Smeltz on a number of times and made a sizzling run of his own.

The win puts Sydney FC into equal second in Group H alongside Urawa Reds. Shockingly Guangzhou Evergrande are bringing up the rear with just one point from the first two matches.

12th minute: A stray ball from a Sydney defender leads to a rushed shot by Martinez as he was tracked into box. Sydney looking nervous at the back in the early stages.

21st minute: PENALTY. Sebastian Ryall tugs at the shirt and wrestles Martinez to the ground inside the box. But Ricardo Goulart’s shot is saved by Sydney FC keeper Janjetovic.

25th minute: GOAL! Huang Bowen charges into the box and fires off a shot that is deflected into goal by Sydney defender Aaron Calver.

28th minute: Jurman heads a corner into the post. The rebound sparks shouts of handball in the box but the referee waves play on.

38th minute: Free Kick into the box lands on Goulart’s head, but the out of condition forward heads it straight at Janjetovic.

40th minute: Carney & Smeltz with a clever one two. Carney’s shot forces a diving save as the Sky Blues find their way into the match

53rd minute: Yu Hanchao brings down a long ball in the box, but the pursuing defenders force him to rush his shot. This moment was arguably Guangzhou’s best chance on goal in the second half.

63rd minute: Sydney midfielder Brandon O’Neill breaks away on another Sydney counter. He makes a rash decision to shoot from distance despite the support of players on either side of him bearing down on just two defenders. This breakaway is indicative of Sydney’s increasing momentum as their edge in fitness begins to tell.

81st minute: Paulinho wins the ball deep and distributes to Martinez. The midfielder produces a ridiculous ball for Goulart on left. As Goulart makes his way into the box he is shepherded to the outskirts but his trickery beats the two defenders. Appeals for a penalty for fall on deaf ears though Goulart has strong claims for having shirt tugged in box.

84th minute: Carney makes a sizzling run into box holding off defenders only to have his shot muffled by a desperate sliding tackle.

89th minute: GOAL! Dimitrejovic with great finish after Carney’s rolled the ball in from the left. Dimitrijevic surprised his markers, attacking the ball and catching them flat footed. The Serbian wasted no time reeling off his left foot shot and the Guangzhou keeper simply couldn’t cope with the power from close range. 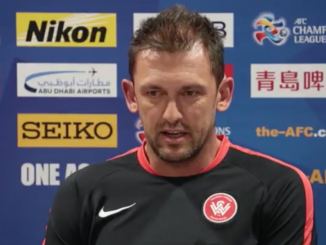 ASIAN CHAMPIONS LEAGUE: THREE POINTS A MUST FOR WANDERERS