In the shadows of the big spending Chinese teams and FC Tokyo’s demolition of Chonburi FC, a man called Shim, Dong-woon scored a stunning hat-trick in the Asian Champions League’s final play-off fixtures.

Shim’s Pohang Steelers were expected to beat Vietnamese club Hanoi T&T comfortably but were it not for the 25 year old forward, things may have been a little different. Playing on the left of a front three Shim struck first with a superb volley worthy of a Champions League fixture, on any continent.

Shim had made an unchecked run into the centre of the pitch, where he met a long ball at the edge of the box and redirected it into the back of the net. [watch the goal and highlights on this link]

Pohang’s pocket rocket then went on to score in the 62nd and 84th minutes. The win put his team into Group H of the ACL alongside Guangzhou Evergrande, Urawa Reds and Sydney FC.

It’s hard to imagine a tougher or more glamorous group in the Asian Champions League. The only team in Group H not to have won the ACL is A-League outfit Sydney FC.

Pohang with their three titles as Asia’s number one club (most recently 2009), will battle reigning champs Guangzhou Evergrande on 24th February. The Koreans are at home for their next two matches, and though Shim, Dong-woon is not renowned for his goal-scoring, the killer instinct he showed in the ACL play-off could be enough to guide his club through a tough group.

Most are predicting a battle for second place in this Group H. An in-form forward could be all that separates 2nd from the also rans. 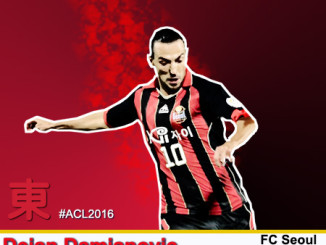