It’s time. We’ve been studying and tracing the form all year around for this one race. I personally have done all I can to prevent a dastardly equi-beast slipping under my radar and cancelling out my ‘hard thought’ (not a spieling error) First 4 picks.

I have been picking the Melbourne Cup First 4 for approximately 20 years now. My love affair with Cup exotics kicked off when I went awfully close to a trifecta in 1997 with Linesman a gallant 5th, after jockey Larry Cassidy missed the start and was forced to rally forward, burning the animal out in the early stages.

But anyway, I’m over that.

It’s 2020 and in the ensuing years I have experienced some heartbreakers but I finally got my just desserts in 2019. One thing I have learnt about the Melbourne Cup First 4 is that you have to make some big calls, be brave and sacrifice some horses. Usually classy horses that are racing over the 2 miles for the first time. This year I am taking on Sir Dragonet. Despite being steered by big race master Glen Boss I just don’t think he’s been trained for this. His Cox Plate win was brilliant (I had a small bet on him) but he’s got a repugnant barrier and in what I see evolving into a slow to moderate pace I don’t see him being able to go around horses like he did in the 2040m race last week.

On the subject of race pace, I anticipate a very similar lead pack as last year. Twilight Payment and Master Of Reality being amongst the leaders and possibly joined by Vow And Declare with Etah James going all out as an 8 year old mare. Conversely to the Caulfield Cup, Anthony Van Dyck should get a good sit somewhere very close to the pace as his racing in the northern hemisphere illustrated that.

For Tiger Moth I have a lot of respect. But I see the barrier draw hampering this guy significantly. If he goes forward he is likely to have the two Lloyd Williams runners, Oceanex or Persan making it difficult for him to get better than 3 wide by the turn out of the straight. This could be enough to drain the horse’s stamina reserves in the home straight. If McEvoy goes back on Tiger Moth, he’s then at the mercy of the pace set by the frontrunners. And it’s in the interests of them to plod along at as slow a pace as possible, thwarting the chances of anybody midfield or worse.

Don’t be ‘Surprised Baby’ if Craig Williams gets his 6 year old gelding closer to the pace then we’re used to seeing. He’ll be weary of a slow pace and won’t want to have the horse in the same predicament as it was last year.

If I had only one bet, I would put my money on Twilight Payment. He is likely to be on the pace and he has shown a lot of resilience over the final stages of his recent runs in Ireland. One of our YouTube Channel’s ‘commenters’ Bdawg 39 made the astute observation that Twilight Payment was being offered at $2.50 to finish in the Top Ten. I recommend this bet to anyone. It is still being offered at Sportsbet as I write.

For the remaining placings I definitely see Anthony Van Dyck, Surprise Baby, Prince Of Arran, Verry Elleegant and Master Of Reality figuring. Though there is no money for her (a concerning sign) I will throw Oceanex into my First 4 as her run in the Moonee Valley Gold Cup was reminiscent of her run in the Port Adelaide Cup prior to her win in the Andrew Ramsden. She was wide and made a mid race move in both races. She should be primed for a big run though she is wearing an equicast – adding some authority to the lameness scare. In a situation where the race has a decent tempo Tiger Moth becomes more of a hope and so does Ashrun, but they still need luck. Steel Prince has been cruelled by the barrier draw and a faster tempo is the only hope of him creeping into the First 4. My own speed maps put The Chosen One and Avilius in fortunate positions where given conservative rides they may run into the First 4. You probably shouldn’t leave Russian Camelot out as he has not run a bad race. My doubts come from the firmer track and barrier today.

Don’t forget, only bet what you can afford to lose, but also don’t be ashamed to take a percentage of a large prize. A Standout First 4 with just 25% of the dividend can still be a five figure sum, as I learnt last year. 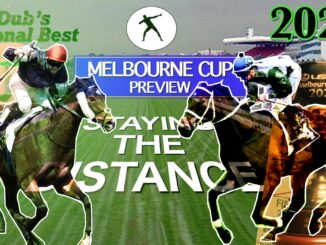 5 Comments on Melbourne Cup Day Is Upon Us