Melbourne started well with an early goal for Besart Berisha. The Albanian headed home after a failed clearance was volleyed into the six yard box by Broxham. Berisha was unmarked and the Jeonbuk keeper had no time to win the ball.

Jeonbuk found their feet soon after and pressure began mounting when Victory centre back Delpierre picked up a yellow card for fouling Lee, Dong-Gook on the edge of the box. In the 13th minute Leonardo stepped up and made it 1-1 with a superb free kick leaving Victory keeper Thomas rooted to the ground.

For the remainder of the half the two teams were relatively even. Melbourne had appeals for a hand-ball turned down while Lee, Dong-Gook threatened again, this time with a sharp turn and volley in the box.

Melbourne went to the sheds with 55% possession and 5 shots on goal to Jeonbuk’s 4.

Early in the second half (47th) Berisha missed a chance he would have usually gobbled up. The Albanian failed to make full contact with a crossed ball, in from the left. The goal was wide open. Admittedly Berisha had his view obscured but as the perfectionist got to his feet he shook his head in disappointment.

In the second half Jeonbuk were a very different proposition. They were happy to sit back with numbers behind the ball and take their chances on the counter. On the few times they did get out of their half, breakaways Lee or later in the match Lopes were lone figures

One of the major moments of the second half was the substitution of fan favourite Archie Thompson. The A-League’s leading goalscorer was replaced in the 69th minute by young George Howard. Thompson was visibly moved by the ovation he received and even shed a tear as he took his place on the sideline.

Later Melbourne went close when a ball was whipped in to a crowded box from the left. In a crowded box defender Georgievski was afforded some space but failed to sufficiently redirect the ball.

Jeonbuk continued to flirt with danger by sitting deep but in the 85th minute they appeared to be caught short. Substitute Howard was released and for a fleeting moment it seemed he’d be able to reel off a shot, but his defender did enough hassling and harrying to cause him to lose the ball in the box. A close shave for the visitors.

At the final whistle it was Melbourne Victory 1-1 Jeonbuk Hyundai Motors. Full-time possession stats painted a picture of dominance for Melbourne who had 67% to Jeonbuk’s 33%. Rather more poignantly, both sides only managed 6 shots on goal.

Next week two teams go into the second leg at Jeonju evenly poised. Though some will count Jeonbuk’s away goal as a vital advantage. 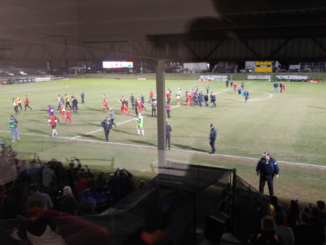