They may be a regular visitor to the Asian Champions League but it doesn’t equate with any form of Asian success. The Central Coast Mariners have once again failed to deliver on the Asian stage and their demise is painfully of their own doing.

The Mariners have now had 14 matches in ACL competition for a measly one win. In their third visit into Asian soccer’s flagship club competition, the team from serene Gosford (an hour and a bit north of Sydney) are once again experiencing failure. The first round clash with Suwon Bluewings of Korea saw the Mariners dominate but fail to rack up the three points even with the assistance of a penalty in the 88th minute. On that night in February manager Graham Arnold rested regulars Patrick Zwaanswijk (defender) and  John Hutchinson (midfielder).

Wednesday night’s visit to Kashiwa saw Graham Arnold resting four regulars from the Central Coast’s first eleven. Top scorer Daniel McBreen, non stop midfielder Pedj Bojic, fullback Joshua Rose and former Socceroo Mile Sterjovski. It’s fair to say that they got what they deserved. The Mariners were thrashed 3-1 by a Leandro Domingues inspired Kashiwa. The Brazilian striker made a mockery of the Mariners defence with the second of his goals, a volley from the edge of the box after earlier involvement in the same movement.

Midfielder John Hutchinson was quick to sight financial differences between the clubs in a post match interview but these matters aren’t usually mentioned unless you’ve come off a bad result. The Mariners had led 1-nil but immediately fell into the trap of sitting back and waiting for their opponent. It’s obvious the Central Coast have afforded their opponents too much respect, as Hutchinson’s comments illustrate, “They’ve obviously got a big budget and umm it’s a good league, the Japanese league.” Unfortunately nobody paid much attention to the fact Kashiwa were roundly thumped by FC Tokyo on the Saturday prior to this ACL clash. Manager Graham Arnold was also heard praising his opponents, “. . . When you look at the foreigners, the two they had out there tonight in Cleo as well as Domingues, they’re probably a totally different level to anyone in the A-League.”

It’s true manager Graham Arnold is stuck between a rock and a hard place. He has to juggle ACL group matches with the pointy end of the A League. Resting players is justified but crying poor won’t make things any better or easier to deal with. Champion teams overcome hurdles such as these. Unfortunately the Central Coast Mariners are still yet to take home Australian soccer’s biggest prize and this year will be no different if Arnie and the yellow team continue to play the underdog, little battler card. Finding comfort in losing as the underdog is not what champion teams do.

Meanwhile in other significant results from the eastern side of the draw, Urawa Reds gave Muangthong United an absolute hiding after the Thai team went a man down early in the piece. Beijing Guoan defeated J League champs Hiroshima 2-1 and Guangzhou Evergrande also kept Chinese hearts fluttering with their 1-1 result at Jeonbuk in Korea.
About Editor 252 Articles
Spreading the word on soccer in East Asia. 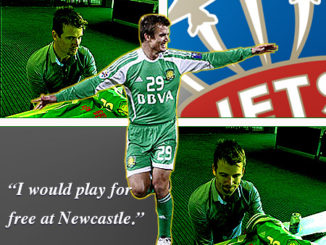 JOEL GRIFFITHS: TO CHINA, JAPAN AND BACK AGAIN