It’s time to get serious J League fans. I’m now confident enough to put in print my genuine title contenders. Okay, I’m having the ultimate each way bet by selecting four teams, but lets not forget last year’s title was a three horse race up until the last 20-30 minutes of the season. Would it surprise me if that occurred again? No.

The J League ladder sees first placed Sanfrecce Hiroshima only 9 points clear of tenth placed FC Tokyo, but there are a number of reasons why the title is down to just four teams now. Now I’m not a betting man but, I can tell you it’s safe to put your house on one of the following four teams winning the 2012 J League title: Sanfrecce Hiroshima, Vegalta Sendai, Urawa Reds or Kashiwa Reysol. But there is only 9 points between first and tenth, I can hear you say. And there are 15 games to go, I hear you say. Oh don’t worry, I haven’t forgotten King Kev and the Toon with 12 points lead back in 95/96 either.

The fact that there is only 4 points between the top four teams is the biggest factor in my selection of four, and only four contenders. The other reasons for eliminating all the other teams from the title race include, inconsistency and lack of ability. The weekend’s action was enough evidence to say that many teams just lack some of the elements which make up a champion team.

Going back to our historical example in Newcastle United (95/96) there is a significant difference in the 12 point margin they had and the margin the top four teams have on the chasing pack in this year’s J League. Newcastle sat atop the table on their lonesome. Sanfrecce and Sendai are tied on 37 points while Urawa and Kashiwa sit on 34 and 33 respectively. Students of probability will know that one team is more likely to behave badly than four teams. Back in 95/96 one team (yes, Newcastle United) did behave very badly. In 2012 four teams will not behave badly. Maybe one will drop out of the race early, but I’m not brave enough to predict which team that would be.

Now to focus on the ‘also rans’. Jubilo Iwata’s (30pts) 2-nil loss to Urawa Reds on the weekend was enough to say yes it was an apparition. Jubilo once moonlighted as a title contender, but a spate of long term injuries, and two forwards (Baek Korea and Yamazaki Japan) lost to Olympic duty mean, the goals will dry up for Maeda and co. Yokohama F Marinos (30pts) have suddenly turned up in 6th. The team from Kanagawa have not lost a J League match since April 21st. Thats 12 matches undefeated but unfortunately that run of matches includes 5 draws. As much as I’d like to see my mates in Yokohama successful, I just think they lack the potency. Put it this way, Yokohama won’t be earning the nickname ‘the entertainers’ very soon.

Kawasaki Frontale (30pts) are one of those teams that simply lack consistency. They have something in common with Nagoya Grampus (29pts) and that is not a good quality. Nagoya are in need of an overhaul and manager Stojkovic doesn’t have much time. Seriously, stop messing with us Nagoya! After 6 J League matches without loss, they head to Hokkaido to play a Sapporo team already doomed to the J2 next year. So did Nagoya show the mettle of champions and grind out a win without Kennedy, Nagai and Tamada, no! Of course not.

Sagan Tosu (28pts) are the underdog punching well above their weight. They have been steered to a successful season via smart management. They have conceded just 18 goals in 19 matches. That’s equal third in terms of J League defencive records. Manager Jung-Hwan Yoon (Korea) has made his blue and pink team hard to beat: a good idea when venturing into J1 for the first time. Tosu will not win the title though because their attack is not as impressive as their defence. Finally FC Tokyo, (28pts) who are also a promoted team cannot win the title on account of a hectic playing schedule. They began the season well and after five matches sat 1 point off the lead, however, their commitments in the ACL and now the Yamazaki Nabisco Cup have proven too much for them to maintain a push for the title. The weekend’s loss to 14th placed Niigata was comprehensive and they look tired. Coincidentally, Vegalta Sendai and Kashiwa Reysol are still involved in the aforementioned cup competition. Will this affect their title hopes?

Here are some highlights from the FC Tokyo v Albirex Niigata match. Niigata as predicted here at East Asian Soccer are on the way up. 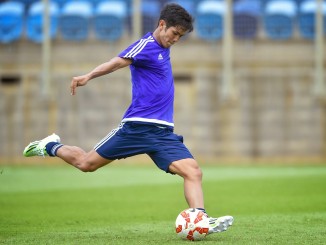 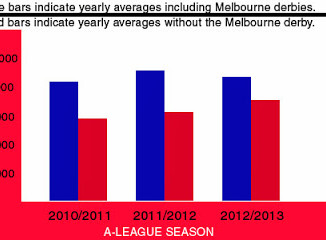 MELBOURNE JUST DOESN’T HAVE THE HEART FOR TWO TEAMS

5 Comments on J-LEAGUE TITLE DOWN TO FOUR TEAMS