Almost halfway through the season and still it’s anyone’s title in the J League. Vegalta Sendai still sit atop the table after the last two rounds saw them take on some of their closest rivals. Sanfrecce Hiroshima and Jubilo Iwata are two and five points off the pace respectively while last season’s champs Kashiwa Reysol ominously edge into the frame.

Many doubt Sendai’s credentials to carry off the J League title however, it’s one of those seasons where nobody else has stood up to say, ‘we want it more’. Perhaps the biggest mover and shaker is 2011 champion Kashiwa Reysol. Kashiwa have taken 16 points from the last 18 points available to them. Not long ago we were thinking they could be the first team to be promoted to the J1 and win the title straight up, before being relegated again the next year. That’s not going to happen though, and the weekend’s 6-2 drubbing of Gamba at Gamba is a clear message to all their opponents. With no more commitments to the ACL the ‘Sun Kings’ are definitely one to watch. Next week they take on the stuttering Nagoya at home, without the services a recently departed Hiroki Sakai, another Japanese player off to Germany.

Elsewhere at the top of the table Jubilo Iwata gave FC Tokyo a lesson 3-1 at Yamaha Stadium (Iwata). Something is definitely amiss at FC Tokyo. Even with Hasegawa playing the full 90 minutes they only picked up their goal in the 89th minute. As Hisato Sato grabbed another goal Sanfrecce Hiroshima were able to snare a point at Yurtec Stadium when they took on Vegalta Sendai. Vegalta were a little fortunate as Wilson’s second goal in the 79th minute came from a defencive blunder. As for Sato, his goal was a gem tapped in off the outside of his left foot as he flew through the air to meet a bouncing cross from the right. Super!

I had the pleasure of travelling to Big Swan Stadium to watch the Albirex Niigata game against misfiring big guns Kashima Antlers. It was a truly entertaining affair with both teams efforts belying their positions on the table. The sultry and prancing Dutra putting on one of those performances that Brazilian soccer players are renowned for. He picked up a goal with a quick turn and shot from just inside the box and wowed the crowd with his backheel passes. He danced around the stage in his glowing orange boots in a free roaming role, the only blight on his game being his lethargy and some spectacular simulation. However, some might say his simulation was also part of the package, it certainly had me entertained. Poor Niigata look set for relegation though sitting second last and 5 points away from safety. They did replace their manager recently though and one thing I took from the match was their shape at the back was very stable. Good luck to them and their loyal fans. 35,506 fans turned up to see the men in orange as they fight for survival.

I look forward to seeing this table sort itself out in the coming weeks with Hiroshima hosting third placed Jubilo Iwata while Vegalta Sendai head to Kobe to take on a team on the up with newly appointed Akira Nishino. Nishino took Gamba to the ACL title in 2008 and the J League title in 2007, will he have the same success with Kobe? 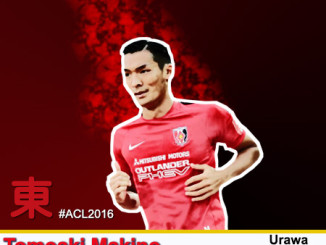 JETS SET TO BLOW THE MARINERS OUT OF THE WATER