Gamba Osaka have hit rock bottom. After a season of torment in the J League which saw them relegated to Japan’s 2nd tier for the first time, Gamba bombed out in the Emperor’s Cup final to Kashiwa Reysol. It truly was a case of Gamba’s J League form coming back to haunt them. After a recent undefeated run to gain entry into the Emperor’s Cup final gave fans a glimmer of hope, today was the hammer blow which sent the marquee club crashing into J2 with a thud.
Ironically some Gamba fans are glad that the team didn’t win the Emperor’s Cup, as it would see them committed to an Asian Champions League campaign while playing for promotion in a league which involves more than 40 matches. Now it’s Kashiwa who will contest the ACL in 2013 just as they did in 2012. Kashiwa put on a decent showing in 2012 making it to the knockout stage only to meet eventual winner Ulsan Hyundai first up. The win today came about via a Hirofumi Watanabe header. The centre back got himself on the end of a Jorge Wagner corner and made Gamba pay for not taking their own chances. Truly a season of despair for Gamba Osaka.
About Editor 253 Articles
Spreading the word on soccer in East Asia. 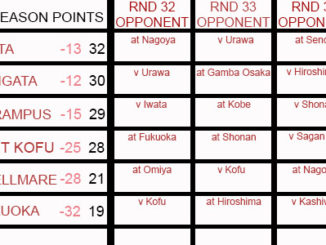