On Saturday afternoon Yokohama F Marinos regained the lead of the J League after downing Sanfrecce Hiroshima. The weekend was a top of the table showdown with one playing two, and three playing four. All four teams still remain in contention for the J League title, but it was F Marinos and Urawa Reds who took full advantage.

At Nissan Stadium, Yokohama and Hiroshima played a mostly dour first half with few opportunities. For Hiroshima Yojiro Takahagi proved the most threatening with two shots on goal denied by Yokohama keeper Enamoto. Yokohama’s best chance of the half came and went when Shunsuke Nakamura made the mystifying decision to pass to his right rather than left where marksman Marquinhos lay in wait, bearing down on goal.

But the two teams would be separated by a piece of individual brilliance provided by youngster Manabu Saito. The left sided midfielder snaked his way past a number of defenders, to find himself in the box within shooting range. Saito let fly with an unstoppable shot into the left side of goal. It sent the 39,000 plus Yokohama fans into raptures, and it was enough for the Tri Colours to regain the lead of the J League. After the match Saito was quoted by the Japan Times saying, “Since we played Urawa Reds in the league (Aug 28) I haven’t been able to play as well as I would have liked . . .” The 22 year old has enjoyed a stunning season and it wouldn’t be surprising if he was the next J League star to be stolen away by the European leagues.

In the other big match of the round Urawa travelled to Kashima and took all three points. The Reds appearing in their repugnant green-blue kit went ahead after 20 minutes, when defender Daisuke Nasu headed home a corner. The second goal came via a long range strike by star Genki Haraguchi. Admittedly Haraguchi was the recipient of some woeful goalkeeping. Yuya Osako gave the home team and their 30,000 plus fans some hope in the 87th minute, after sloppy defending allowed him a shot on goal which he duly gave some violence. The match ended 2-1 and now the J League heads into its last five matches with six points separating the top five teams.

Cerezo Osaka have now joined the race for the title albeit as outsiders. They sit six points from Yokohama, but in their favour Cerezo will play three of the teams they’re chasing in Hiroshima, Kashima, and Urawa. Next week: Hiroshima host Vegalta Sendai, Kashima host Kawasaki Frontale, Urawa are at home to Kashiwa Reysol, while Yokohama travel to relegated Oita, and Cerezo Osaka also travel to the island of Kyushu to face Sagan Tosu. 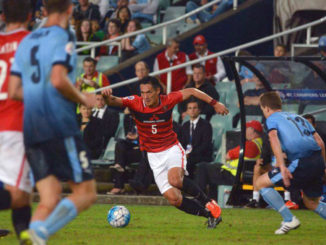 43 Comments on F-MARINOS TOP THE J-LEAGUE