Yokohama F Marinos have knocked off J League strugglers Sagan Tosu overnight, to further reinforce their credentials for the J League title. While the pink shirted Tosu side are in a relegation battle, Yokohama didn’t have it all their way.
The evergreen Shunsuke Nakamura put the Tri-colours in front in the 23rd minute, but Tosu didn’t go away. With plenty to play for Sagan Tosu were able to jag a goal in the 56th minute. A draw would be as good as a win for Tosu as they are only one point above the relegation positions, currently filled by Shonan Bellmare, Jubilo Iwata, and Oita Trinita. But not to be outdone by his fellow elder statesman, F Marinos striker Marquinhos provided an acrobatic winner to take his team just one point from the summit. Be sure to catch that goal on youtube.
All the more pleasing for F Marinos is the fact they did this without 23 year old Manabu Saito. Most would agree the youngster’s days in the J League are numbered, and the marquee leagues of Europe beckon. Along with Saito’s stunning season and cache of fab-goals, F Marinos have profited off a resurgent Shunsuke Nakamura. The dead ball specialist has been much more significant then in previous seasons since his return from Europe. At 35 he is loving every minute and it isn’t too far fetched to say that maybe, just maybe, the local boy could bring the title to Yokohama once again. The last time Yokohama captured the title was in 2004, in the era of the two stage season.

Elsewhere, competition leaders Hiroshima kept on their winning way with a victory over Jubilo Iwata. Hisato Sato was once again on the scoreboard in a 2-1 win. At the top end of the table Urawa slipped up against improving Nagoya Grampus. Aussie Josh Kennedy again proved a thorn in the side of J League defenders, picking up the second in a 2-nil win at home. In the other significant fixture at the top, Omiya Ardija fell further from grace, and back to the reality their tortured fans know. Cerezo Osaka put the cleaners through the home team, with Europe bound Yoichiro Kakitani grabbing two goals, in a 3-nil win.

Next week Hiroshima host Nagoya Grampus who have now strung together five wins in a row. Third placed Urawa at home to also-rans Oita Trinita, while Yokohama F Marinos take a short trip to the capital to face inconsistent FC Tokyo. 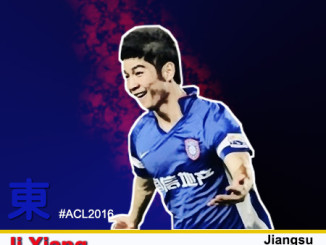 4 Comments on F-MARINOS ON HUNT FOR HIROSHIMA