ATC General Manager James Ross was out at Canterbury Racecourse this morning (2/4/2020) to catch a glimpse of Japan’s Danon Premium in trackwork. The racecourse in Sydney’s west doubles as a quarantine centre for foreign horses visiting Australia and the facility is also home to UK raiders Young Rascal and Addeybb.

Danon Premium was clocked running about 37 seconds for his final 600 metres in the lead up to his big test, the Queen Elizabeth Stakes on Saturday week (11/4/2020). The training session allowed local jockey James Macdonald to familiarise himself with the horse that he’ll be riding in just over a week. While speaking on Sky Racing this morning Ross reported that the horse had travelled well and that the five year old handled the track well, saying, “It was probably in between a 6 and a 7.” For foreign readers that translates to a yielding track. He added that the horse was training at a similar weight to his racing weight of between 504-508kg.

His last two starts in Japan were both Group 1 level and the five year old was 2nd placed in both outings. There are some doubts about his chances if there is significant rainfall in the days preceding the race. However, if the ATC GM Ross’s reports are accurate, punters who got on Danon Premium early should feel a little more assured about their wager. He is currently paying $4 at Bet365, Ned’s and Sportsbet. Addeybb the Irish import is favourite at $3.75.

You can catch vision of both Danon Premium and Addeybb in track work at the Twitter account of the ATC. 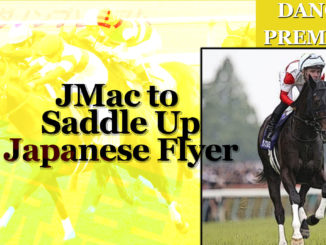