Guangzhou Evergrande have won the last three Chinese Super League titles, along with a Chinese FA Cup in 2012, and last year’s Asian Champions League crown. In his first full season as manager Marcello Lippi steered the team to the league title by a mere 18 points. But with a number of regular starters leaving the club this season, and the capture of Dejan Damjanovic by Beijing Guoan, suddenly the tigers of the south have some competition.

Beijing Guoan now trail the champions by just four points and importantly the team from the capital have a game in hand. Since returning from the summer break Beijing have captured seven of a possible twelve points. Not exactly a competition winning statistic, but the points surrendered were away from home and early in the Damjanovic era. And while Beijing’s 3-0 win over Shanghai last weekend was a little flattering the green team have only one competition to focus on, unlike Guangzhou Evergrande.

With new co owners Alibaba (50% stake), Guangzhou have no problems when it comes to player recruitment, however, player retention is a problem. In 2014 Asia’s number one team has had to deal with the exit of Dario Conca (off season), and club record goal scorer Muriqui (summer break). To expect Guangzhou to be as good a team as they were last year when the aforementioned were at their peak, is asking a lot. Yes, the tigers have splashed out on Alessandro Diamanti, and added another Italian Alberto Gilardino, but for all their experience it’s rare that players arrive and blend with their new teammates immediately. Former Dalian Aerbin defender Li, Xuepeng is one who hasn’t blended seamlessly with his new teammates. His recent arrival has coincided with the club conceding five goals in their last two matches.

For Guangzhou Evergrande to continue their dominance they’ll be expected to win the Chinese Super League and the Asian Champions League. Their next assignment in the ACL (20th August) is Western Sydney Wanderers. Along with the nine hour flight, Wanderers should prove to be a stubborn opponent. Domestically Guangzhou’s opponents can benefit no matter what the outcome of the two legged ACL quarter final. If they win, Guangzhou will be caught up in continental travel and a busy playing schedule. If they lose, the bubble around the team/club may finally burst.

These are interesting times for Guangzhou and if they’re to ‘be the best forever’ in 2014, as their slogan says, it will take some quick adapting from their most recent arrivals. 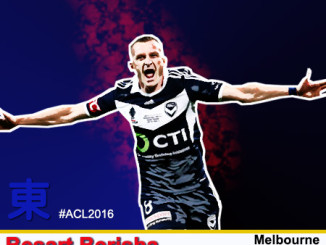 TEN OF THE BEST: BESART BERISHA

37 Comments on CAN GUANGZHOU BE THE BEST FOREVER AGAIN?