The Socceroos 2014 World Cup qualification hopes sit precariously. Australia currently lie third behind the barnstorming Japan, and surprise packets Jordan. This round of World Cup qualifiers (04/06/2013) pits Australia against the Blue Samurai, while Jordan has a bye and Oman host Iraq. All the talk from the Socceroos has been about the fighting spirit which exists in Australian teams. Josh Kennedy said, “All of us fight down to the last second of the game . . .”

In international soccer/football it’s often said that ‘class tells’ or ‘class rises to the top’. Sadly for Australia at this point in time the core of it’s eleven are playing in leagues a number of tiers down from the elite European stages such as Spain, Germany, Italy and England’s Premier League. This is in contrast to the Japanese squad, which has been compared to the peaking 2006 Aussie World Cup squad.
The Japanese have invaded Germany’s Bundesliga with as many as five members of the starting eleven currently plying their trade there. Also starring in Europe is Yuto Nagatomo at Inter Milan and the feted Shinji Kagawa playing at Manchester United. Meanwhile, Japan’s biggest weapon Keisuke Honda remains in one of the second tier leagues of Europe, that of Russia. For Japan however, the past two internationals have seen hiccups. They slipped up in Jordan 2-1 minus the zip of a Honda driven midfield, and in the friendly last Thursday night (30/05/2013) against Bulgaria, the Blue Samurai just lacked the cutting edge, although they were trying out a different formation. Coach Alberto Zaccheroni said, “I don’t think our opponents created so many chances, but we couldn’t create as many as we wanted to either.” Again Japan played without Honda.

As well as being outclassed on paper, Australia are also lacking match fitness in many positions. Captain Lucas Neill hasn’t played a competitive match since 23rd March, midfield weapon Brett Holman has played 11 minutes as a substitute for Aston Villa since their 23rd April, clash with Manchester United. Also expected to fill a midfield position is ‘yellow card prone’ Mark Milligan. Milligan’s last competitive outing dates back to 14th April. Then there is the problematic left back position. Michael Zullo of Utrecht played his last full 90 minutes on 21st April, other options are Michael Thwaite (last game 5th April) or Matt McKay a midfielder who has filled the role before but not convincingly.

Despite all of the factors pointing toward a Japanese victory, Socceroos captain Lucas Neill is quietly confident of getting a result. The defender has revealed that the Japanese are actually under a lot of pressure. “What we do need to highlight is that Japan has lost two in a row now. They have a goalkeeper that’s shown some shaky moments. I know how much media attention there is around this Japanese team.” Tim Cahill also had a confident tone, “For us it’s all about us . . . we prepare right we stay relaxed. Play the game not the occasion.” Now with New York Red Bulls and regularly on the score sheet, Cahill is the face the Japanese have seen enough of. In 2006 he rammed home two goals in the World Cup group match, while in 2009 he headed home 2 more during World Cup qualification. Perhaps Australia’s best hopes lie in the less familiar members of the line-up though. Robbie Kruse has had a breakout season with Fortuna Dusseldorf and has now been snapped up by Bayer Leverkusen. The striker/winger was one of the most fouled players in the Bundesliga and much of Australia’s hopes will lie in Kruse’s ability to get to past his opponent.

If pressed to predict a result I can see the Aussies picking up at least a draw. Australia’s ability in big matches against the headline acts has been proven throughout history. Meanwhile, this Japanese squad are under more intense scrutiny then any soccer team from ‘the land of the rising sun’ before them. Expect the Socceroos to bully the Japanese early and their opponents to struggle to put together the fluid passing game that they’ve built their success on.
About Editor 252 Articles
Spreading the word on soccer in East Asia. 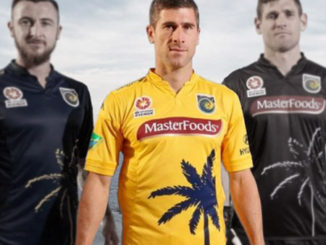 9 Comments on AUSSIES TALKING A GOOD FIGHT IN JAPAN