Tonight Brisbane Roar travel to Kashima – east of Tokyo – to take on reigning J-League champions Kashima Antlers. Brisbane sit bottom of Group E currently but it’s far from panic stations as their Japanese opponents are only two points ahead of them in this early stage of the Asian Champions League.

In Kashima’s last ACL fixture they were defeated by Thai club Muangthong United in Thailand. Muangthong went ahead early in that match after a Nagaki foul was turned into a one-nil deficit via a stunning left footed free-kick by Theerathon Bunmathan. Kashima later levelled via Brazilian duo Leandro and Pedro Junior. Leandro’s cross from the right put it on a platter for Pedro who did the job of slotting home though his first touch wasn’t the best. Kashmir should have led late in the match but substitute Suzuki failed to convert the penalty he had won. Finally Muangthong hit Kashima with a sucker punch when Xisco poked home a deflected ball from the goalkeeper.

Kashima’s form in the J-League has been strong. From their three matches to date they’ve scored two wins and one loss. The loss came on opening day (25/2/17) against FC Tokyo. An own goal brought them undone in the 82nd minute. Their most recent outing was on Friday night against Yokohama F Marinos. That ended in a 1-nil win for Kashima with a late goal for Suzuki.

As well as the aforementioned viewers should look out for Kashima’s number 4 Leo Silva (listed as Hugo Leonardo Serejo). The former Albirex Niigata midfielder is a phenomenal ball winner and will definitely make life difficult for Holman, Borrello and Jamie Maclaren.

It seems that Brisbane may have travelled to South Korea for their last outing believing that their fitness edge would be enough to get them by. Instead they were routed 6-0 nil by opponents Ulsan Hyundai. Tonight Brisbane will be looking to make amends. Defender Jade North was not deterred by the previous result and instead recalled Brisbane’s success at Urawa in the ACL 2 years ago.

“We know how to set up well against Japanese sides. Last time we played in Japan we got a good result and we’ll be looking to do the same again against Kashima,” North said.

Though Japan is coming out of winter, Brisbane players and fans should definitely rug up, as Kashima can be very cold. I sat freezing as the Japanese club shocked Guangzhou Evergrande 2-1 in 2015. More of the same is forecast for tonight, with wind gusts of up to 50km/hr and 5 degrees temperatures. It’s not for the faint hearted and it is part of the reason perhaps that the Antlers never manage to draw a strong crowd on ACL nights. There’ll be no more than 8,000 on hand but they’ll make plenty of noise. 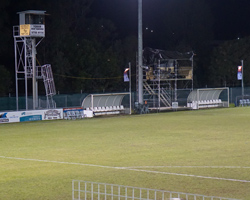